Frank and Len are dicephalic conjoined twins. Rockers by nature, these two patchwork brothers live in the mansion's garage. They have their own garage band, known as R.I.P. (pronounced RIP). Frank's head is blue and has savvy hair while Len's head is green and his hair is flat. Frank and Len's strength lie in performing music. Unfortunately, this seems to be all that is their strength, since they both tend to lose focus on anything that isn't their music. They can hardly focus on something if it doesn't have a beat. Frank is actually the more intelligent of the two, often getting annoyed at Len's lack of understanding. Len is the more sentimental one, who seems to have a thing for small animals and things that don't exactly matter in anyone else's book. Even though they seem upbeat for their music, the two of them are almost never on the same page, even though they're both in the same body. Despite this fact, Frank and Len are close. For example, in the episode "Quadro-Gloomia", when the brothers needed a way to become unconscious, they were unable to hit each other over the head with planks. Another example of this is in the episode "Iris Springs Eternal". Ruby, Frank and Len were sliding down a mud slide when Frank said, "Len, if we don't get out of this I just want you to know that you've been the best brother a brother could have for a brother." Also, as of the episode "Quadro-Gloomia", Frank and Len appear to be the only housemates (other than Doom Kitty) who know about Ruby's crush on Skull Boy. 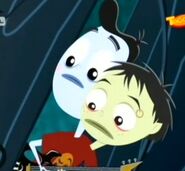 Add a photo to this gallery
Retrieved from "https://rubygloom.fandom.com/wiki/Frank_and_Len?oldid=5916"
Community content is available under CC-BY-SA unless otherwise noted.